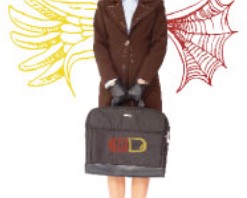 The Drug Rep Debate
Some miss them. Some have moved on. Docs weigh in on the value of pharmaceutical reps.
By Howard Bell

When Jon Hallberg, M.D., was medical director of the University of Minnesota’s Primary Care Center in the early
2000s, managing the sample closet was a full-time job for a nurse. In 2004, the clinic went sample-free and drug rep-free, and Hallberg hasn’t looked back. “Once you get rid of the samples and drug reps,” he says, “you practice evidence-based prescribing. You don’t get excited about new drugs that haven’t been fully scrutinized and often aren’t more effective than older drugs that cost much less. I don’t miss the free lunches or the cakes shaped like Prozac. And I don’t miss the information they provided, which is always one-sided.” Instead, Hallberg uses UpToDate and the Prescriber’s Letter, which he says is “fantastic,” plus the New England Journal of Medicine and the Journal of the American Medical Association (JAMA) to learn how new drugs stack up against old ones.

Now medical director at Mill City Clinic in Minneapolis, where reps aren’t allowed past the front desk, Hallberg says, “We’ve entered the golden age of generics, where we can prescribe so many great meds so cheaply. Cost is now part of the conversation between physicians and patients. I rarely put a patient on a new medication and only if there’s a clear benefit to the patient.”

Clinics and hospitals big and small throughout Minnesota have restricted drug company reps’ access to physicians or completely banned them from their premises. It’s a trend that gained momentum five years ago, after influential physicians writing in the January 25, 2006, issue of JAMA called on academic medical centers to set an example by no longer allowing their physicians to accept gifts, trinkets, vacations, tickets to shows and sporting events, or payment for speaking about a drug or device company’s products. The concern was that such gifts influence prescribing. As a result of hospitals and clinics tightening their rules about allowing drug reps through the door,
physicians have had to find new ways to learn about the pharmaceuticals they prescribe. Some are happy with this change, others aren’t. Here’s how a few feel about the issue.

Relying on Pharmacists
At Essentia Health in Duluth, “drug reps are pretty much totally out of the picture,” says Kenneth Irons, M.D., a family physician who spearheaded Essentia’s effort to purge its clinics of drug-related gifts and trinkets back in 2006. “I know a lot of reps in northeast Minnesota have lost their jobs in the last three years,” he says.
There are a couple of exceptions to Essentia’s no-rep, no-sample policy. Physicians can make a special request to get a sample of a particular drug. For example, some cardiologists request samples of Plavix, a medication used to prevent blood clots, which they will give to patients going home on weekends after a heart catheterization procedure to ensure that they have the medications they need until they can fill their prescription. Essentia  doctors are allowed to attend dinners sponsored by drug companies on their own time, but Irons believes attendance at such events has drastically declined.

Essentia’s electronic medical record (EMR) is linked to the Medical Letter, the Pharmacist’s Letter, and UpToDate, along with a few peer-reviewed journals. “None of these accept grant money, donations, or advertising,” Irons says.

In addition, Essentia’s pharmacists research the safety, effectiveness, and cost of all drugs before they’re added to the formulary. They also brief physicians on medical management issues, for example, for patients on warfarin. “Our staff pharmacists provide us good reviews on new drugs,” Irons says.

Dr. Crutchfield featured in Minnesota Medicine discussing the value of…