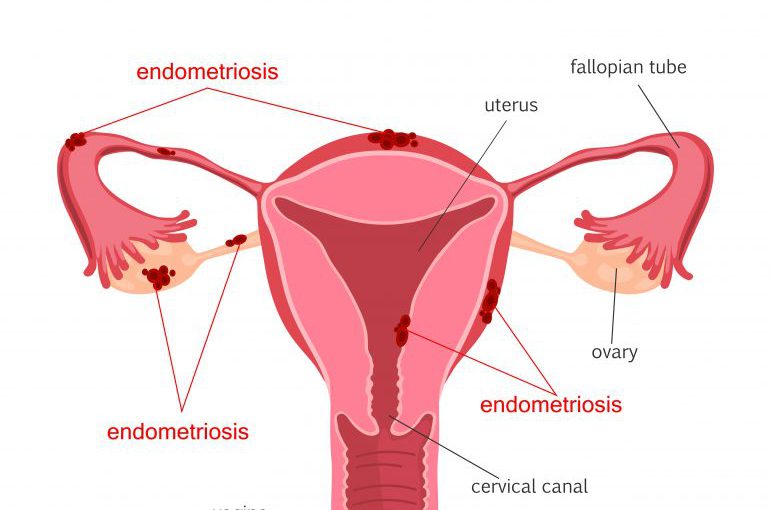 Endometriosis: A painful yet treatable condition for women

Dr. Crutchfield, my cousin was recently diagnosed with endometriosis. What is endometriosis? Endometriosis (en-doe-me-tree-OH-sis) is a painful condition that occurs in women when cells that normally reside inside the uterus grow outside the uterus in the pelvis. Normally, these cells reside in the inner lining of the uterus called the endometrium. During a regular menstrual cycle, under the influence of hormones, especially estrogen, the endometrial tissue swells and prepares to accept a fertilized egg. If a fertilized egg does not arrive, the endometrial tissue is shed (the bleeding associated with a woman’s period) and the monthly cycle begins over with new endometrial tissue in the uterus developing for a possible pregnancy in the future. With endometriosis, endometrial cells can become attached to ovaries, fallopian tubes, and the lining of the pelvis (see picture above). During the regular menstrual cycle, the tissue thickens, swells, and sheds, but the ectopic (normal cells in an abnormal location) endometrial tissue does not get shed during menstruation as it normally would as a part of the inner lining of the uterus. As a result, the tissue is trapped in place and can cause pain, scarring, and even adhesions in the pelvis. Endometriosis is a common cause of pelvic pain and infertility. Rarely, endometriosis can be the cause of a rare form of pelvic cancer. It affects an estimated 12 percent of women (almost six million) in the U.S. and is most common in women in their 30’s and 40’s, but can occur any time after menstruation begins. Symptoms The primary symptom of endometriosis is significant discomfort and pain. Frequently, women can experience discomfort and cramping during menses. In endometriosis, patients report a much more intense pain and discomfort than usual. The pain of endometriosis tends to worsen over time and can be quite severe.

The severity of pain is not necessarily an indication of how severe endometriosis is. Although endometriosis is associated with pelvic pain, there are other medical conditions like ovarian cysts, inflammatory bowel disease, and pelvic inflammatory disease that can cause pelvic pain. A doctor must determine the correct diagnosis as sometimes a patient can have more than one condition causing pelvic pain. Cause of endometriosis Doctors are not sure what causes endometriosis. Theories include a backward flow of blood during a period to deposit endometrial tissue in the pelvis, an abnormal response to hormones causing pelvic tissue to become endometrial tissue, and endometrial tissue being present in the pelvis since birth. There are several other hypotheses, also, but no one is certain of the exact cause. Endometriosis risk factors Diagnosis A doctor will take a careful medical history and perform a pelvic exam. Additionally, imaging studies like ultrasound or an MRI may be obtained to assist in the diagnosis of endometriosis. Also, a surgical procedure called laparoscopy can be performed. This is where a very small incision is made in the abdomen and a special viewing tool is inserted to inspect the areas for endometriosis directly. During this procedure a sample of tissue can be obtained and, sometimes, the area of endometriosis can be removed. Treatment Fortunately, many effective treatments are available. Initially, only mild pain medications may be required. Because the endometrial tissue is affected and activated by hormonal activity, especially estrogen, other treatments may include hormonal modulation and hormonal therapy. In severe cases (including some cases of infertility), surgery may remove or reduce the affected tissue. In other instances in which pregnancy is not an issue, a hysterectomy with removal of the ovaries may be an option. Endometriosis can be a challenging medical condition to diagnose and treat. Fortunately, endometriosis can be managed with success. If you have pelvic pain, see your doctor for appropriate evaluation, diagnosis, and treatment plan.

Dr. Crutchfield, my cousin was recently diagnosed with endometriosis. What is…

New advances in the war on cancer: living cell therapy

Want to prevent illness and disease? Wash your hands!