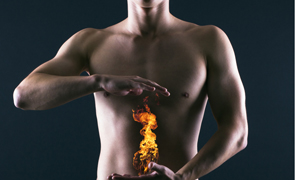 Heartburn is an extremely common condition.  It’s caused by acid backing up from the stomach into the esophagus. It is very unpleasant and can even feel like an intense fire burning in your chest that rises up into your neck.

The most common treatment for heartburn is over-the-counter antacids. The active ingredient in antacids is calcium. In addition to antacids, there are several behavioral changes that can be of benefit. These include:

Losing weight. In fact, this is the most effective way to reduce heartburn and is recommended by most doctors.

Avoid the foods that trigger heartburn for you. People can have different triggers, but pay special attention to fried foods, foods high in fat, carbonated and caffeinated drinks, alcoholic drinks, spicy

Eat smaller meals. Smaller meals put less pressure on the stomach, reducing the ability for acid to rise into the esophagus.

Eliminate tobacco. Tobacco interferes with the esophagus’ ability to close properly and block the rise of acid.

If you find yourself taking antacids multiple times per day, or even more than two or three times per week, it is time to see your physician. You may have a medical condition named “GERD” — short for gastroesophageal reflux disease. Untreated long-term heartburn can cause significant problems including tight bands and inflammation in the esophagus and, although rare, long-term untreated GERD has been associated with cancer of the esophagus.

The nice thing is that, if needed, there are very good prescription medicines that can prevent these problems. Your doctor will discuss and recommend the best options for you.

Heartburn is an extremely common condition.  It’s caused by acid backing up…

Ebola Fever: What is it and how is it spread?

How To Avoid Getting The Flu