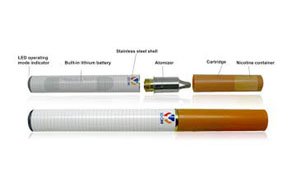 What are electronic cigarettes and why should I care about them? Cigarette smoking is the leading cause of preventable death in the United States, but the creators of a breakthrough device are hoping to change that by encouraging smokers to use an alternative method. Commonly referred to as “e-cigarettes,” these battery-powered devices come in a variety of shapes and models, including those that resemble standard tobacco cigarettes and those that mimic cigars and tobacco pipes.

E-cigarettes work by giving smokers a nicotine hit without actually exposing them to tobacco smoke. This is made possible due to a special chamber (atomizer) with a heating element and a liquid. The actual nicotine is in the liquid, along with propylene glycol and flavorings. The atomizer chamber aerosolizes this liquid, turning it into a vapor that can be inhaled, while also creating a vapor cloud that realistically resembles cigarette smoke.  These vapors are essentially odorless unless the liquid is heavily flavored.

Manufacturers claim that e-cigarettes are a safe alternative to the conventional use of tobacco in cigarettes, cigars or pipes. However, the Food and Drug Administration (FDA) has yet to come to a conclusion about the actual safety of e-cigarettes. Their hesitation is partially due to the fact that some of the ingredients, such as propylene glycol, have the potential to convert into harmful components during the heating process.

While the FDA investigates, the general lack of knowledge seems to have created some type of mass hysteria. In fact, several countries, including but not limited to Canada , Australia, Hong Kong, Brazil, Lebanon, Singapore, Panama, Norway, France, Malaysia, Egypt, France, Colombia, and Uruguay, have outlawed e-cigarettes due, in part, to the fact that we know so little about them and cannot vouch for their long-term effects.

Yet, one cannot help but wonder why, then, regular cigarettes are not banned in these same countries. After all, we know the absolute dangers and long-term effects of tobacco found in cigarettes.

My opinion on e-cigarettes:

E-cigarettes have the potential, if used appropriately, to become one of the biggest health advances and benefits in the past 50 years. I make this claim because, as a physician, I have seen firsthand the success that many of my patients have had with e-cigarettes.

These are patients who smoked daily for the past 18 years and could not seem to break the habit, even with help from prescription patches, gum, sprays, and other nicotine replacement therapies. I have never seen anything quite like it.

The fact that smoking continues to be the leading cause of preventable death in the United States astounds me. The facts are out there, yet people remain dedicated and addicted.

Cigarettes contain over 5,000 known compounds, the majority of which are harmful to our health. However, many experts argue that there may actually be up to 50,000 compounds in tobacco smoke that are not yet understood. What we do know for sure is that smoking kills.

Over 440,000 people die each year in the United States from their smoking habits, and close to 50,000 non-smokers meet the same fate due to exposure from secondhand smoke. In the United States alone, that amounts to over 1,300 deaths per day!

Worldwide, tobacco use causes more than five million deaths per year, and current trends show that tobacco use will cause more than eight million deaths annually by 2030. While 81 percent of Americans do not smoke, the one in five people who do smoke will cost the country $96 billion a year ($260 million per day) in direct healthcare costs, and an additional $97 billion a year in lost productivity.

Next week: The pros and cons of e-cigarettes

Cigarette smoking is the leading cause of preventable death in…

Red birthmarks: their cause and treatment