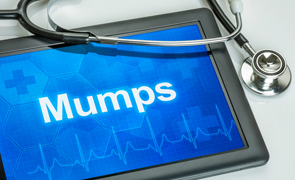 What is mumps and why should I care? Mumps is an infectious disease that primarily affects the saliva-producing (salivary) glands. This includes, most notably, the parotid gland (in front of and below the ear) and also the glands under the tongue.

In fact, the term “mumps” is an old-fashioned term for “lumps in the cheeks.” Mumps are most common in children, and in children the disease is relatively mild and runs its course.

Common presentation of the mumps includes:

Painful swollen glands on one or both sides of the face

Unfortunately, mumps is not limited to childhood. There have been recent outbreaks on college campuses and, most recently, throughout the National Hockley League. In adults, the disease can have very serious complications. Complications of mumps are potentially serious, but rare.

Most mumps complications involve inflammation and swelling in some part of the body, such as:

• Painful swelling of the testicles (orchitis). Thirty percent of men with mumps get this condition. In rare cases, this can cause infertility (inability to father a child).

• Nausea and vomiting from inflammation of the pancreas (pancreatitis). This occurs in about five percent of cases.

• Painful swelling of the female ovaries and breasts. Five percent of women who get mumps get this condition. In half of these, the disease can cause infertility (inability to mother a child).

• Inflammation of the brain and its covering — encephalitis (one percent) and meningitis (10 percent)). These can be life threatening.

• Hearing loss. Although very rare (less than one percent), mumps can cause permanent hearing loss.

• Miscarriage. Reports suggest that about 25 percent of pregnant women who get mumps during the first trimester may miscarry.

After having the mumps, reinfection is possible but tends to be mild and rare.

Mumps is a viral disease. It is spread by the saliva of an infected person, usually through coughing or sneezing. It can also be transmitted by sharing food and drinks from an infected person. The mumps virus can also live, for a while, on surfaces that get contaminated from a cough or sneeze or saliva.

The incubation period, or the time from when a person is infected to the time they start showing symptoms, is 12-24 days — typically about 15 days. An infected person is contagious eight days before the symptoms start and for eight days after the symptoms appear.

Because of this lag time, infected persons can spread the disease without even knowing it. About 30 percent of all people who get infected with the mumps have mild symptoms or no symptoms at all, and yet they can spread it too. This makes it a very difficult disease to control. Mumps is considered most contagious in the five days after the onset of symptoms.

How are mumps diagnosed?

Typical swelling of the cheeks, fever, and malaise with a history of exposure are strong clues for the doctor. There are blood tests that can also confirm the diagnosis.

Can mumps be prevented?

In general, people are believed to be immune to mumps if they’ve previously had the mumps or been immunized against mumps. The best preventive protection against the mumps is vaccination.

The mumps vaccine is usually given as a combined measles-mumps-rubella-varicella (MMRV) vaccination or the older vaccine without the varicella component (MMR). Two doses of vaccine are now recommended for best protection, the first at around age one and the second at around age five.

How is mumps treated?

Because mumps is a viral disease, common antibiotics against bacteria won’t work. A mumps infection must simply run its course, usually in about 15 days. Supportive measures can be used such as acetaminophen for pain and fever control (not aspirin to avoid Reye’s syndrome), salt water gargles to soothe the throat, soft foods to avoid hard chewing and swallowing, and ice or heat compresses to sooth painful glands.

There are no proven immediate methods to prevent someone from getting mumps if they have recently been exposed.

Action steps for anyone who suspects they have the mumps

Contact your doctor and let him/her know of your suspicions and symptoms. If an office appointment is required, they may see you without delay to avoid infecting others in the reception area. Your doctor will direct you on what to do next.

Charles E. Crutchfield III, MD is a board certified dermatologist and Clinical Professor of Dermatology at the University of Minnesota Medical School. He also has a private practice in Eagan, MN. He has been selected as one of the top 10 dermatologists in the United States by Black Enterprise magazine and one of the top 21 African American physicians in the U.S. by the Atlanta Post. Dr. Crutchfield is an active member of the Minnesota Association of Black Physicians, MABP.org

Mumps is an infectious disease that primarily affects the saliva-producing (salivary) glands.…

Circumcision is a Family Decision

What Is Radon & Why Should I Care?