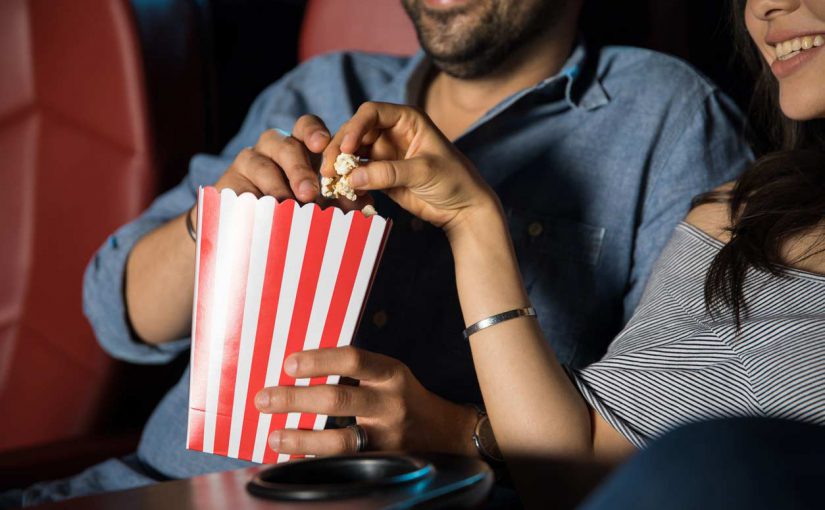 Why do we eat popcorn in movie theaters?

Calvin (of Calvin & Hobbes fame) once proclaimed, “It’s not entertainment if you can’t sit in the dark and eat.” Americans really seem to enjoy combining those two activities: concession sales account for about 85 percent of a movie theater’s profit, and popcorn accounts for most of that.

It’s an odd custom when you think about it: while trying to pay attention to what’s happening on the screen, movie patrons absentmindedly reach into a bag of $6 popcorn (actual value: a few cents) and then snarf down handful after handful. It’s greasy, loud, and not very healthy—especially when you add all that butter. So whose bright ideas was it to make popcorn the cornerstone snack at every movie theater from London to Honolulu?

Back in the early days of cinema, eating anything in a theater was frowned upon. The Great Depression changed that. With little money available for more expensive entertainment, Americans flocked to movie theaters (now offering movies with talking!). At the same time, popcorn was becoming a popular—and cheap—snack.

Eager to cash in on both fads at the same time, enterprising vendors started setting up carts with popping machines outside if cinemas. At first, theater owners wouldn’t allow patrons to bring the loud, messy snack inside…until they saw there was money to be made. Then the vendors were invited inside, and the rest is snack history.

Source: “Do Geese Get Goose Bumps?” By The Bathroom Readers’ Institute

Calvin (of Calvin & Hobbes fame) once proclaimed, “It’s not…

Designing With Chocolate the Easy Way